The Fairmont Chateau Frontenac, situated within the Old City of Quebec  is a sight to behold from any vantage point in the area. This photo was taken on the expansive  and historic Terrasse ‘Boardwalk’.

After my pleasant train journey on VIA Rail from Montreal, I arrived in Quebec City on a lovely warm Sunday afternoon in late

So many talented people display their creations and sell them on La Rue Des Artisans, a short walk from the. Chateau Frontenac. I was not allowed to photograph their work, so an artist took my picture instead!

June.  A taxi collected me and we drove a short distance through pedestrian congested streets to a special holiday treat for my overnight: the world-famous five-star Chateau Frontenac!  No, I did not win the Canadian lottery, but I did have enough travel points accumulated to be able to ‘afford’ this luxurious stop-over.   I only additionally paid for breakfast and I relished every minute of my stay there.  This historic hotel, which was originally built in the 19th century  on the site of an ancient military fort, deserves every distinction as the ultimate accommodation. I don’t think I could ever do better than that – except to save enough points for two nights next time!

When I checked in, I was immediately informed that my room had been upgraded!  I looked at the clerk quizzically and explained: “But I am not paying for this room, it is through travel points.”

My river view room had a window that opened for fresh breezes off of the water – just perfect for someone who cannot tolerate A/C and air tight buildings!

She smiled as she informed me that there was a river view room available, so instead of looking inland at the architecture of old city (equally appealing!), I would be able to look over the 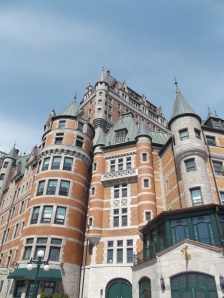 I was looking up to see if I could figure out which window belonged to my room in the elegant Chateau Frontenac. I think I did know at the time.

Boardwalk and the St. Lawrence River! I appreciated this welcoming gesture and was further charmed when a pleasant bell-hop brought my bags to the room by service elevator.  When he came in, he explained every feature of the tastefully decorated room – in French, when he discovered that I could speak the language. (Both English and French are capably spoken by tourism industry workers in Quebec City).  I unpacked a little and freshened up, but I was eager to hit the streets. I had not been to this Belle Ville for over 20 years, and that had been in mid-winter – at that time of year the river breeze is frigid and less conducive to a leisurely stroll unless all bundled up!  Mind you, I have been here several times in my younger years, thanks to my parents, who usually stopped  for the night when we were driving to Nova Scotia in summertime, There were a few other forays, with my high school French class and my brother Marc, to name a few.  I can’t remember off-hand, but I am sure my brothers will remind me if I ever went downhill skiing at nearby Mont Ste. Anne – maybe we just went to have a look in summertime.  Or maybe they slalomed without me!

The winter winds may be frigid, but there is plenty to do to keep warm during Quebec City’s annual winter ‘Carnaval’, which takes place  before Lent, just like Dominica. Above, ‘Bonhomme‘ invites you to experience this unique winter celebration, which is full of fun! (I’ve been there, and can vouch  for good times to be had!) 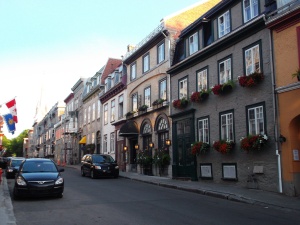 As I wandered around the quaint narrow streets, dodging occasional vehicles (along with thousands of other visitors), I admired the beautiful buildings that had been proudly restored.  Quebec City had celebrated its 400th anniversary in 2008 and is now recognized as a UNESCO World Heritage Site.

I could easily see why – as it is the only city in North America that has preserved its buildings to represent ‘a fortified city of the colonial era.’  While the little lanes were packed with tourists, I did not see any garbage or  other forms of detritus about. Every park, lane-way, monument,  house, restaurant, hotel and sidewalk was immaculate and totally litter-free.  What an example for other cities to follow!

I also strolled along La Terrasse (Boardwalk)  until it merged into la Promenade des Gouveneurs.  I walked up the steps, admiring the river views until I came to

The Promenade des Gouveneurs ascends to the grounds of the Quebec Citadelle from the scenic river view walkway.

the grounds of the historic Quebec Citadelle, a Parks Canada site. I covered a good portion of the grounds but did not go inside this time, nor did I venture over to the notable Plains of Abraham where Wolfe (eng) and Montcalm  (fre)battled it out in 1759 and both died as a result of fatal injuries. The French surrendered at that time.  But you can read a  Canadian history book to find out more!

It was getting late (for me) and as I hadn’t eaten any dinner, I popped into a creperie around 8 p.m for a light meal.  A folk singer performed some easy listening oldie goldies in English and

The Creperie is actually situated on a patio behind the entrance way. It was lovely!

French on his  guitar, which complemented the casual but congenial ambience of the outdoor patio.   Again, it was only a few steps from the hotel.  I could feel fatigue coming on, so I quickly savoured my egg/onion crêpe and headed back to the Chateau Frontenac.  There, I slept very well on a supremely comfortable bed!

Next morning, after a huge breakfast in my room, I decided that a walking tour would give me a little more background on this fascinating city. I did take a tour in English with a group of Americans who had arrived by cruise ship.  Robert, our guide plied us with so much information that I truly regretted not having brought my voice recorder!  What I am now left with are impressions, and the need to re-read that Canadian history book to reinforce what I heard on this sensational two-hour walk around town.

We covered quite a bit of ground, and a few of the principle sites of the city include the following in photos:

The old part of the city is surrounded by walls or ramparts, as seen in this photo.

I had recently read about Marie de l’ Incarnation, who came to Quebec City in 1639, founded the Ursuline Order right here, as well as the first school for girls. She was an exceptional woman!

The entrance to the Girls’ School and the Ursuline Order.

The Notre Dame de Quebec Cathedral/Basilica is a sight/site to behold and is a testament to the strong foundation of Catholic religious practice in Quebec.

The Anglican Cathedral of the Holy Trinity was completed in 1804 and was the first of its kind to be built outside of the British Isles! There is definitely an Anglophone influence in this church!

Robert, my walking tour guide and I parted here as I had to check out of the hotel. I left after he had described this site, which was a seminary/boys’ school that he had attended. It was originally established by Francois de Laval, the first Bishop of New France in 1663. The Seminary section became University of Laval in 1852.

On the tour, I encountered a place where I ate a warm meal on a very cold night in 1976 when I visited Quebec with my high school French class for Carnaval in mid-winter. Aux Anciens Canadiens is a well established traditional Québécois restaurant in the heart of the old city. 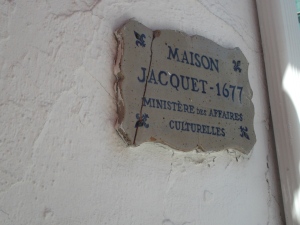 Aux Anciens Canadiens is on the site of the oldest existing house in Quebec City. It’s been there since 1677!

After I checked out (late – with the gracious hotel staff’s permission!), I left my baggage in a safe storage room behind the desk of the concierge.  By then, my big breakfast had worn off and my feet were worn out from Robert’s comprehensive tour.  Guess where I went for lunch? Aux Anciens Canadiens, of course, for a repeat gastronomic experience after a 38 year absence! Although it was mid-summer and not mid-winter,  I still consumed all the filling courses, but for only $20.00 CAD, I wouldn’t need another meal that day!  I started with Quebec Pea Soup, which was followed by stuffed slices of duck in a divine  fruit sauce with tender-crisp vegetables and a healthy serving of mashed/baked potatoes. 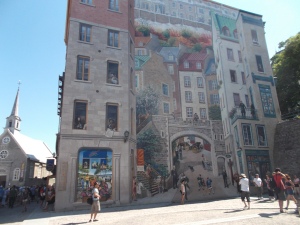 I love this mural – which is very realistic in its presentation.

Then I found room , somewhere, for a gigantic slice of sugar pie with whipped cream (tarte au sucre). 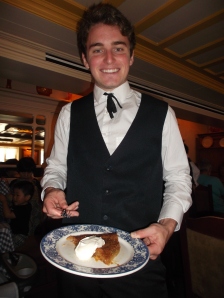 My delightful server presented me with what looked like two servings of sugar pie! No, I did not leave any on the plate…

I really did roll down to the Old Port (Vieux-Port), below the Old City’s walls after that.  The steep uphill return was difficult because I was so overstuffed.  But I do NOT regret it – that was traditional Quebec dining at its finest with a price that could not be compared with anywhere else!

By now, it was mid afternoon – I was hot and felt very sluggish, but I am glad I took some  time to see a few more points of interest.  Then I spent the rest of the day and into the evening lounging in little parks, gazing at the river from the Boardwalk and later sitting in comfy chairs in the lounge at Chateau Frontenac.  Around 8 p.m., I collected my gear, picked up a taxi and headed to the Palais du Gare (train station) where I waited for a bus to take me across the St. Lawrence River to connect with the famous Ocean train, which would depart around 10:30 p.m.  and carry me for the next 20 hours all the way to Halifax Nova Scotia!

From the harbour, the cruise shippers can easily walk to many of the attractions of the Old Port and a little higher up, the Old City. 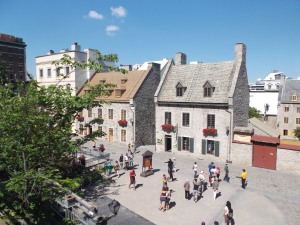 The Vieux-Port or Old Port section of the city is charming and beautifully restored. They are many specialty shops and cute cafes in this area.