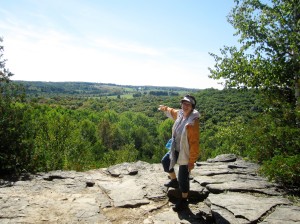 The 400 acre Nottawasaga Bluffs Conservation Area on the Niagara Escarpment is a mere half hour drive west of Barrie and is south of Collingwood.

My extended visit to Canada (thanks to Tropical Storm Erika in Dominica) started and ended in a lovely city one hour north of Toronto, which is a relatively easy commute by car, bus or train from there to the big city.  One of my brothers lives in Barrie, Ontario and I spent several weeks with him and his wife Beth, which included a number of outings to the surrounding countryside.  I had no idea how beautiful the area is, until my brother Edwin showed me around!  I could understand why Torontonians like to escape on weekends to this region, as it offers nature, culture and adventure of a slightly different kind than dear Dominica! 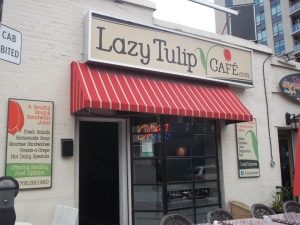 The Lazy Tulip Cafe is conveniently located near the Barrie Bus Terminal, at 29 Maple Avenue.

For me, culture always includes cuisine, and apart from a number of delicious home-cooked meals, I enjoyed regular runs into downtown Barrie with my laptop under my arm for some  organic ‘java’ and gluten-free food.  I was pleased to make the acquaintance of Michelle,

If you want to know why it’s called the Lazy Tulip Cafe, you just have to go there and ask Michelle, the owner!

proprietor of the Lazy Tulip Café. I really enjoyed the homey ambience, convenient WiFi and casual conversations over my usual half-day stay.  That’s where I wrote several of my Dominica-Erika blog posts! Michelle sincerely commiserated with me about the catastrophe on Dominica, as she has a property in the Bahamas, and understood the vulnerability of Caribbean islands to natural disasters.

Lo and behold, didn’t she write me this note just a few days ago: “I feel like we are living in a parallel universe as I sit here now in the same shoes you were in a few weeks ago. Rum Cay [Bahamas] got hit by [Hurricane] Joaquin and is currently in a state of devastation. I set up this Facebook page in hopes of communicating! https://www.facebook.com/rumcaycommunity

It is certainly a coincidence that we both profoundly felt the effects of life in the hurricane zone, even though we were both far away from it when the storms hit our respective adopted homes!

On weekends, my brother took me to several wonderful places and I am very grateful to have had the opportunity to explore new territory in my home province!

On my first Sunday in Canada this past June, he dragged this weary but

I think this is a Thomson, but you can correct me if I am wrong! 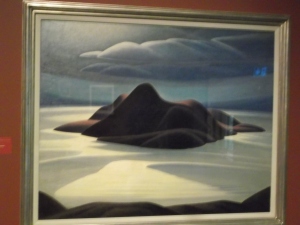 interested traveller to the McMichael Canadian Art Gallery at Kleinburg, Ontario.  There, I took in for the first time, the incredible, renowned paintings of the famous ‘Group of Seven‘, along with Tom Thomson, First Nations and Inuit artists. If you want to have an overview  contemporary of Canadian styles, then this is the place to go!   I thoroughly enjoyed this gentle introduction back to my homeland.

A few months later, in mid-September Edwin took me to Kleinburg again.  But this time, we checked out the annual Binder

At the Binder Twine Festival, these musicians played some sweet down-home music.

Twine Festival, which signals the start of the harvest in the Greater Toronto Area!  It’s been around since the 19th century, and certainly

This stiltwalker got lots of attention, even when he wasn’t juggling at the Binder Twine Festival.

draws a crowd from the big city.  While we were disappointed not to see any  large farm animals, I did enjoy looking at handmade quilts, and watching some local performers right on the street.

I also spent a little time in the quaint city of Orillia, an easy half hour north Barrie.  It’s 19th century setting has a small town feel to it, and there are a number of appealing shops and restaurants that draw cottagers, tourists and locals every summer. I was also fortunate to see my longtime naturopathic physician and friend  Dr. Shawna Clark, N.D. as her

Dr. Shawna Clark, N.D. has been my naturopathic physician for over 18 years. She has helped me to have an improved quality of life and health. I don’t know what I would do without her guidance and treatment advice!

office is conveniently located in this pretty hamlet on the shores of Lake Simcoe. In fact, it was tremendously helpful for me to be able to see her in person three times over this long lovely summer.  Her counselling and recommended nutritional support with supplements, along with homeopathic remedies enabled me to cope well with my persistent environmental health challenges.

On Canada Day (July 1st), I convinced my brother to take the half hour drive ‘up the road’ to  see the parade in Orillia.  Last year, I had enjoyed the spectacle in the booming city of Halifax, my favourite east coast port. I was curious to see how a smaller central Canadian centre would celebrate our big national day.

A number of vintage autos formed part of the Canada Day 2015 parade in Orillia, Ontario.

When we arrived, the parade hadn’t yet started, so we had lunch at Mariposa Market Café, a great place for good food and Canadian-style gifts. Then we heard the drums.  We rushed out to line the street with other enthusiastic patriots.  Although it was low-key and rather short, the spirit of the day prevailed, and its country-

Ponies and horses adorned with riders and flags filled the main street of Orillia during its Canada Day parade.

flair, with plentiful horses and antique autos adorned with Canadian flags made me proud of my heritage,

Of course, I am tired!  I had Canada Day fever. I was ready for a slice of strawberry-rhubarb pie to celebrate my heritage!

as a country girl from Canada! I also enjoyed the Canadian folksongs and down-home atmosphere at Barrie Hill Farms on our way home.  It was fun to sing along with the two guitarists, who favoured Neil Young and Gordon Lightfoot (from Orillia) in their repertoire.  I certainly took a trip down memory lane on Canada Day 2015!

These two musicians provided a pleasant backdrop during a snack stop at the farm market at Barrie Hill Farms.

Perhaps most memorable of my prolonged stay with brother Edwin and his wife Beth are the excursions to specific nature sites, all of which were undertaken in fine weather!

No this is not the Caribbean – it’s  Awenda Provincial Park on Georgian Bay near Penetanguishine Ontario. Photo taken by sis-in-law Beth.

When we first arrived at Awenda Provincial Park on the shores of Georgian Bay for a picnic and swim, I felt as if I were on a sandy beach on a Caribbean Island! It was a beautiful  Saturday in early September

Beth and Edwin enjoy our picnic on a perfect September Saturday at Awenda Provincial Park on Georgian Bay.

and for the first time that long lovely summer, I went for a dip – not once, but twice!  It was that warm…. My brother packed a portable BBQ and we enjoyed two meals of organic beef burgers, organic potato salad and organic green salad – all prepared by me!  I was happy to organize this special meal and I was grateful to the pair for hosting me for an extra span of time, while I waited for the airport to reopen on Dominica, following Tropical Storm Erika.  After we feasted, we lounged, swam again and went for a light hike along the extensive shoreline. It was

What a day to be on the beach at Awenda Provincial Park on Georgian Bay near Penetanguishene Ontario.

such a gorgeous day – one I will not soon forget.  Before darkness fell, we and hundreds of others headed south to the cities.  Along the way,

The Martyrs’ Shrine near Midland Ontario is stunning in the evening light of summer. It honours 8 Jesuit Saints who lived and died there over 350 years ago.

we stopped at Mom’s Restaurant in Midland Ontario for coffee and home-made dessert.  Then we drove through the grounds at the Martyrs’ Shrine, across the road from the St. Marie Among the Hurons historic site, This area played a significant role in Canadian history as Ontario’s first European community, dating back to the early 17th century!

There were numerous shorter forays during my time spent north of Toronto –  along the walkway skirting Kempenfelt Bay on Lake Simcoe  in downtown Barrie, pretty Springwater Conservation Area on the outskirts of Barrie, scenic Belfountain Conservation Area and other parks. However, I will cherish my very last September Saturday outing most of all. On the afternoon of the 26th, under sunny skies, we headed off to the Nottawasaga Bluffs Conservation Area.  I admired the verdant fields on the short drive west, as I took in splendid views of the Niagara Escarpment, a very fertile farming area in southern Ontario. As we commenced the walk along a well groomed track, I

This butterfly doesn’t seem to be in a hurry to leave for the winter on that warm, sunny day. Photo by Edwin Whitford. 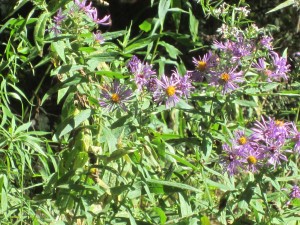 stopped to admire pretty wildflowers and gorgeous butterflies before they no doubt commenced their migration to warmer winter climes. Edwin had visited this park previously, and he led me off on a side track that actually forms part of the renowned Bruce Trail, which is “Canada’s longest and oldest footpath.”  Initially, I wished that I had donned my hiking boots, as the

I caught Edwin going up the trail, as I stopped to take in the lovely forest on the Niagara Escarpment.

slippery rocks, uneven terrain and steep descents were reminiscent of some hikes in Dominica.  Without my hiking pole, I carefully picked my way

Peek-a-boo! The air was cool and damp in those deep crevasses. Photo taken by Edwin.

along, with my brother in the lead.  After several minutes, I was hooting with glee, delighted that this could be my warm-up trek for future forays on the Nature Island!  After about half an hour, the tricky trail looped back to the main track and we found ourselves at a sensational look off over the

It was fun to walk down the narrow chasm on this part of the historic Bruce Trail, which intersects with Nottawasaga. Photo by Edwin Whitford.

scenic Niagara Escarpment (see photo at top). I breathed deeply of pure fresh air, and noted the subtle colour changes in the leaves, signalling summer’s end – but not on that spectacular day! 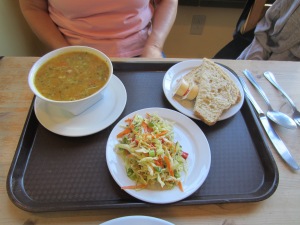 My reward for my efforts  was a late lunch at the warm and welcoming Affairs Bakery and Cafe in Creemore, a small village renowned for its restored 19th century architecture and its home-brewed beer.  I was very hungry from our healthy hike, and I devoured home-made chicken soup, a slice of freshly baked bread, and crispy cabbage salad with gusto.  Then came dessert.  As Canadian Thanksgiving was just around the corner, I fittingly topped it off with a divine pumpkin tart and a

I can’t wait to return to the Affairs Bakery and Cafe in Creemore Ontario. Photo taken by Edwin.

What a fitting finale for my long, lovely summer in eastern Canada.  And I’ve yet to tell you about all the other adventures over my three and a half months.  Lots more to come! 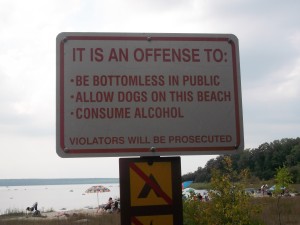 Now that I’ve got your attention…Stay tuned for the continued adventures of Canary Gal in Canada in  the summer of 2015! (Photo taken at Awenda Provincial Park, Georgian Bay Ontario.