Canada Day 2014 in Halifax started with a grand parade in which a contingent of ‘Mounties’ proudly participated.

After a good night’s sleep in my lodgings near the Halifax train station, I woke up refreshed and ready to celebrate Canada Day as only

I feel such pride and nostalgia when I recall my halcyon days in Halifax.

Haligonians can!  In other words, all the stops are pulled out in this fair city to pay tribute to ‘our home and native land’!  I had, in fact numerous reasons to feel joyous in the Canadian city that I fondly refer to as my second home. 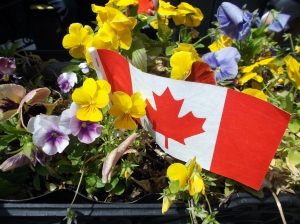 On Spring Garden Road in downtown Halifax, even  pretty planters were adorned with flags for Canada Day.

It was such a thrill to also meet up with  a longtime friend, Dr. Peter Wells, a Professor in the International Ocean Institute   at Dalhousie University.  From 1984 until the early 1990’s, Peter and I and other friends had numerous  intrepid wilderness adventures in Nova Scotia’s great outdoors.

While I was on the ‘Ocean’ train en route to Halifax,  Peter and I corresponded by email. ( I was so glad to have that mini-tablet with me!)We arranged to meet along the Canada Day Parade route, and I got the biggest chuckle when I saw Peter first, approached him tentatively and  then boldly asked (en francais) if he spoke French!  “Oui…,” he started and then recognized me after half a second.  What a laugh we had on the crowded sidewalk!

McKelvie’s Restaurant, with the Halifax Waterfront and Dartmouth shore in the distance.

We watched the parade until it ended, then wandered through the lovely Public Gardens and lunched at a middle-eastern restaurant as we caught up on many years of our lives.  Later, over a

Gwen and Peter point to a sailboat ‘decked out’ for Canada Day just before a festive eve of fireworks commenced over the harbour.

delicious haddock dinner at McKelvies, a longtime fish-specialty restaurant near the Halifax Waterfront, I convinced Peter to try 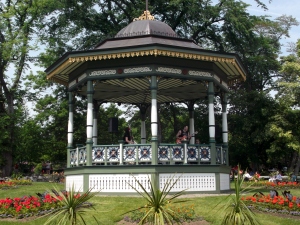 This band-shell in Halifax’s Historic and Beautiful Public Gardens was the focus for a few hours on Canada Day as a small ‘rockabilly’ (Elvis-style) group had the crowd hopping. The petite lady playing the double-bass sure knew how to make that huge stringed instrument sing!

Dominica’s Waitukubuli National Trail.  He’s an avid hiker and had recently taken on the Himalayas (serious stuff!).  I insisted that his hiking forays would be lacking if he did not try some tropical treks.  Renowned local bird authority, hiking guide and forestry officer Bertrand Jno Baptiste is already on notice to assist with this adventure, if he isn’t already booked!  I think Peter will time it to be here for Carnival celebrations too.  I expect to see him on the Nature Island next February – and I’ll go along on some of the hikes!

As I only had a couple of days to spend in this historic port city (and former hometown) before heading to the Annapolis Valley for my aunt’s 90th birthday celebrations, I selected a few main sites to see, leaving the rest for next visit.

I certainly walked down memory lane when I spent a couple of hours in Point Pleasant Park, a popular green space at the most southerly point of the peninsula of Halifax.  This lovely setting had taken a beating during Hurricane Juan in 2003.  It caught everyone off-guard and the damage to this forested park and the Public Gardens was extreme.  Fortunately, Mother Nature and citizens alike put things back in place before too long, and these parks are once again as lovely as ever.

These fragrant wild roses in Point Pleasant reminded me of the field behind my late grandparent’s farmhouse in the Annapolis Valley.

It was a foggy morning when I walked around Point Pleasant . This monument pays tribute to men and women of the Canadian Navy who have died during peacetime.

Memorials always make me shed a tear or two. This one no different – there were a few wreaths remaining from the previous Remembrance Day (November 11th) when those who have died in Canadian naval service  are remembered.

Here are a few photos of this serene setting:

There are several entrances to Point Pleasant, a runners, strollers and dog-walkers’ paradise!

Serenity can easily be found in Point Pleasant Park  – a  short walk or drive from Halifax’s bustling city centre.

As the fog lifted, I leisurely walked for about 20 minutes

The Cafe in the Public Gardens is an ideal spot to sit, read, chat and/or enjoy a treat with coffee or tea in glorious natural surroundings. Featured here is a blueberry-oat bar, the Nova Scotian variety, of course. (They were not in season yet, but the frozen ones tasted great too!)

towards the Public Gardens, where I treated myself to a delicious snack: 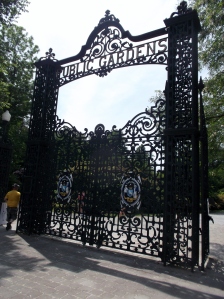 The Public Gardens in Halifax has retained its botanical beauty since Victorian times – 1867, in fact.

Rhododendrons are in full bloom in late June/early July in the Public Gardens. I have memories of time spent admiring them with my dearly departed parents, who really loved this idyllic place.

Energized once again, I took my time walking towards the waterfront from the Public Gardens.  I  admired abundant shops, new developments and my favourite historic sites that have always ‘been there’ during my lifetime, and well before!  Like Quebec City, Halifax played an important role in the founding of Canada and of course, its defense!

Here are some of the buildings that have always captured my attention, along with some historic street scenes:

I love the wooden homes with bay windows. The Halifax climate must be ideal for Rhododendrons!

St. Matthew’s United Church is one of the oldest structures in the city. It was completed in 1754. Halifax was founded in 1749!

Stately buildings on the south end of Barrington Street, not far from the harbour.

This restored building houses the Split Crow Pub, a Halifax landmark in the Historic Properties near the waterfront. 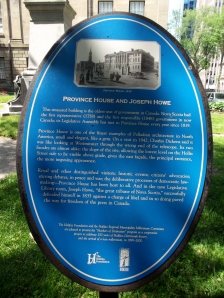 There are plenty of plaques about the place. This one is found at the Nova Scotia Legislature and honours Joseph Howe, a well-liked 19th century politician who lobbied for freedom of the press and fairness in politics! 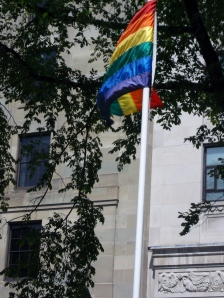 At the Nova Scotia Legislature, the Rainbow Flag flew high, acknowledging people of the LGBT community and their rights and freedoms. Canada had just hosted the 1st World Pride celebration in North America in Toronto.

There are some new buildings too. I gazed upwards with trepidation as I took in this monstrosity in the city’s downtown core – an engineering feat to me!

You will appreciate that I had been ‘hoofing it’ for a few hours and it was time for a late lunch.  I looked about the busy streets – so many choices.  Suddenly, a prominent hanging sign caught my eye: The Old Triangle Irish Alehouse:

The Old Triangle offers delicious organic produce and homemade meals, along with entertainment most evenings.

I instantly remembered that Peter had recommended it, as it was near to McKelvie’s where we had dined the previous evening.  My meal was large, tasteful and wholesome.  I couldn’t have asked for better anywhere, I don’t think.

At the Old Triangle in Halifax, I devoured a savoury meal of organic greens with homemade dressing, codfish cakes and delectable vegetarian baked beans. Of course I ate the whole thing!

As you can imagine, I was not able to walk far after that feast.  As I was in close proximity to the waterfront, I decided to hop aboard the Dartmouth Ferry and take a quick trip across the Halifax Harbour and back.  The waters were calm and I sat for a while, enjoying the views of the  Nova Scotian capital city as we approached the opposite shore. 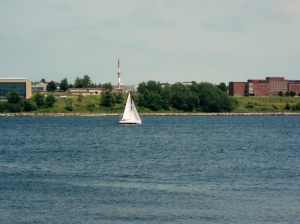 On a sultry summer afternoon, this serene scene  of the Dartmouth shore betrays the busy-ness of the Halifax Harbour, a major port on the eastern seaboard of North America.

The Halifax skyline as seen from the waters of the harbour. This city is the major commercial centre of the four Atlantic Provinces.

Halifax is a very deep, long harbour and is a thriving industrial port, which culminates in the Bedford Basin. The MacDonald Bridge in the foreground, and the Mackay Bridge in the distance link Halifax with its twin city, Dartmouth, on the opposite shore. 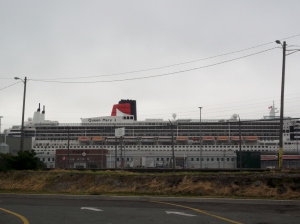 The Queen Mary II was in port while I was in Halifax. She was anchored near Pier 21, which is the area where many immigrants  entered Canada from the 1920’s until 1971 .

It had been a full and active couple of days in my second Canadian hometown and I enjoyed every minute of it.  But I was expected to arrive  in the Annapolis Valley later that afternoon, so I picked up my rental car and headed out-of-town and down the highway.  The ‘Relations’ were gathering for the first of a number of celebrations to salute my aunt’s 90th birthday.  I was delighted to be in Nova Scotia for this momentous occasion.  In the next post, you will see why this grand event will never be forgotten!